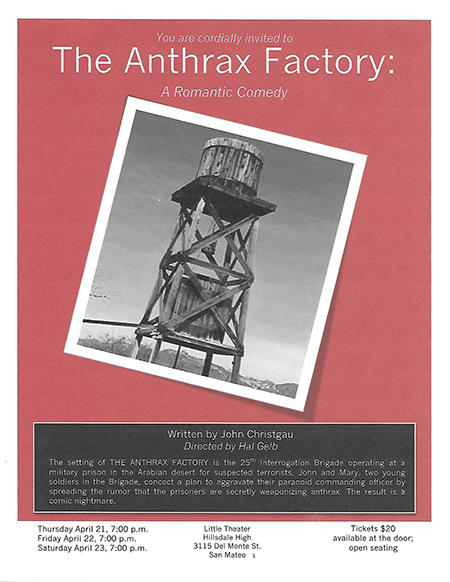 “The Anthrax Factory: A Romantic Comedy” follows the 25th Interrogation Brigade operating at a military prison for suspected Iraqi terrorists. The play’s heroine, Mary, is a young interrogation specialist who concocts a plan to tunnel out of the unfenced Brigade as a symbolic protest and floats rumors of the tunnel to unsettle her harsh and paranoid commanding officer. To further aggravate him, she creates rumors that the prisoners are secretly weaponizing anthrax. As Mary works furiously to feed the rumors and carry on a relationship with a bookish. hypochondriacal enlisted man, the awful realities of the torture of suspected terrorists fuse into a comic nightmare featuring a unique cast of characters.

funded by:
grants from the Haven Foundation and the Diamond Park Trust

Christgau and Gelb previously collaborated in 2003 on three one-act plays—“Zip,” “The White Line,” and “The Master Tailor’s Wife,” about the treatment of people of German, Italian and Japanese heritage during the Second World War. The plays were performed under a grant from The California Civil Liberties Public Education Project.