Award-winning author, poet and playwright John Christgau’s first novel “Spoon,” published by Viking Press, was called a “Candide of the Wild West” and won The Society of Midland Authors prize for Best Fiction in 1978. This was just the beginning of a productive writing career for the Minnesota native. 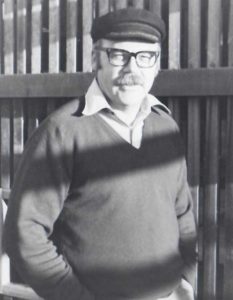 John, a native of Minnesota, attended University of Minnesota from 1953-1954 before serving for three years as an intelligence specialist in the U.S. Army Security Agency based on Oahu.

John attended San Francisco State University where he played on the men’s basketball team from 1957-1960. He earned several All Far West honors, and helped the Gators win the Far West Conference championship in 1960. He was later inducted into the San Francisco State Athletics Hall of Fame (1997). John earned both a bachelor’s and master’s degree in Creative Writing from San Francisco State.

He went on to become head of the English department and coach basketball at Crestmoor High School in San Bruno, Calif. in 1968. After the school closed in 1978, “Mr. C” taught English, and later became a vice principal at nearby San Mateo High School. He officially retired from teaching in 1991 to write full time from his home office in Belmont, Calif.

John passed away in 2018 and is survived by his wife of 58 years, Peggy; his son, Erick; daughter, Sally; and youngest daughter, Jenny; in addition to three grandchildren, Adeline, Eliza Jane and John. 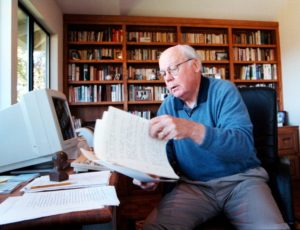 Highlights in his distinguished writing career include ….

“He was amazing and super inspiring. He had an incredible gift for figuring out what made someone special and he wouldn’t just say that, but made sure for the rest of your life you knew that and were going to fulfill your potential.”

“Mr. C. was himself a prolific writer having penned nearly a dozen books, but I’m convinced the greatest story he ever shared was the one he conveyed through his teaching, the decades long testament to the power of passion and caring and nurturing and believing. It’s a story from which I hope we can all learn.”

“He was the first person who ever gave me a Thesaurus. And he followed my journalism career as I went all around the world.”

“I can still see his red pen in his hand editing things and making me pick a better word. His legacy will live forever given the lives of how many students he has guided and nurtured.”