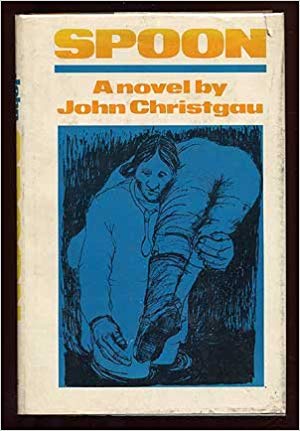 While the United States was at war with itself in 1862, in western Minnesota, an entirely separate battle was being fought. The circumstances that caused the Santee race of the Sioux Indians to declare war upon the white residents of Minnesota—and the tragic aftermath of that uprising—is the backdrop for SPOON, an historical, comic novel by John Christgau, published by The Viking Press (A Seaver Book) on August 28, 1978.

The story focuses on the relationship between, and the antic adventures of, an unlikely pair—Alexander Featherstone, an itinerant artist who is a look-alike for Abraham Lincoln, and Spoon, the character of the title, an eccentric Santee Indian who has no faith in his own creed. Through a series of accidents, they find themselves caught in the middle of the Sioux uprising, first pursued by the Indians, then by the U. S. Army.

As Featherstone’s naivete and romantic views of frontier life continually clash with Spoon’s pessimism and doses of irony, a picture emerges of irrational Indian policies and the burlesque Western heroics of nineteenth-century America. SPOON, Christgau’s first novel, is “entertaining, exciting, and finally, provocative.”

The book won the Society of Midland Authors prize for Best Fiction in 1978.

This tragicomic account of an Indian uprising will undoubtedly prompt comparison with Thomas Berger’s Little Big Man. It is certainly as humorous and as stinging . . .
Publishers Weekly

Spoon is a sort of Candide of the Wild West, a whimsical satire that interprets history as melancholy comedy . . . John Christgau has created a deft and clever miniature epic . . . The fact that Spoon is his first published work makes the feat all the more remarkable.
Atlantic Monthly